Life changes in an instant, it’s a moment in time that cannot be undone.

In June a roommate and I both happened to have the same evening and next day off. We decided to go glamping. In my world that means fancy camping. We found Alpenglow Luxury Camping where we could see Matanuska Glacier and camp out in some tents. These tents were amazing and had real beds in them. Life cannot get better than that. Take a look at the amazing views. There are only three tents so getting a group of friends together to rent out the entire place would be the way to go. We enjoyed the evening on our porch chairs, watching and listening to the rain. There is a little shed / building where our included breakfast was, running water, board games, some plug-ins if we needed them, a fire pit, and a cedar hot tub to use. There is also an outhouse and some flushing toilets if you want to go for a little stroll. In the land of the midnight sun this was a fantastic adventure. 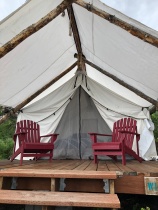 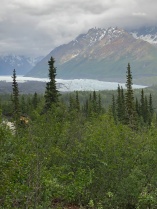 The next day we took my car down a winding road to get to the entrance of Matanuska Glacier. It’s on private land so you have to pay a fee and sign a waiver. A waiver that states you are entering at your own risk and that you understand that if you get injured you cannot blame them. Makes sense to me. I’m choosing to hike on a glacier. I can’t blame anyone but myself if something happens. 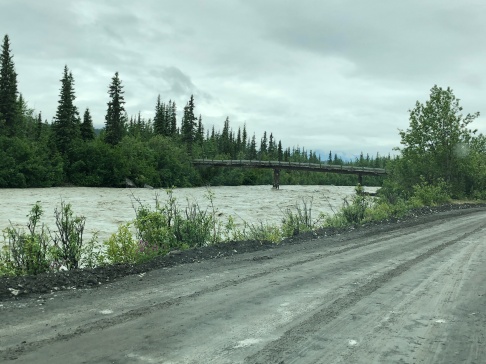 We had our Kahtoola’s, basically micro-spikes that hook onto your hiking shoes / boots. We walked the first portion of the trail without our spikes as it wasn’t slippery enough and we had to walk over metal grates and planks of wood. Once the grates and planks ended and it got fairly icy we put on our micro spikes and continued following the orange cones that marked the one mile trail. At the end of the cones we decided to continue on for a while navigating our own path. Sometimes I was leading and other othertimes my roommate was leading. We both had the proper gear and both of us have been on glaciers before. We had to turn around a couple of times and navigated what we believed would be the easiest route. At one point I thought heading down a chunk of sloping ice about 3 feet was our best plan of action. It turns out it wasn’t. 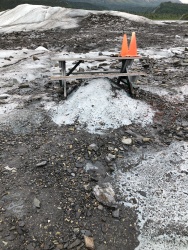 What happened next I can only describe as happening in slow motion. What I know is that I was trying to head down a chunk of ice. My micro spikes somehow got wedged in a small crack. I tried to squat down to unwedge my body was sliding down the chunk of ice. However, I couldn’t stop my momentum until I had rolled over the top of my leg. I could feel it twisting and had instant pain. I rolled completely over it. I had to reach behind me, grab my leg, and pull to undwedge it. My roommate immediately asked if I was okay. I told her no and that I needed a moment before I could stand. My first train of thought was that there was no way I was going to have her call for help (there were phone numbers and names listed on the cones) and they send a helicopter to rescue me. I didn’t want to pay for a helicopter nor did I want to have a helicopter rescue me and the medics tell me that it was just a bad sprain. My second train of thought was if I can stand, I can walk. It took me a while to stand up from the puddle I was sitting in. I was able to stand and slowly hobble off the glacier. Apparently my whole body was shaking with the exertion, adrenalin, and pain. I hobbled back a mile and a half to my car. It took a few hours since I couldn’t walk my normal pace. Sometimes I looked like a baby bird learning to fly as I flailed my arms to keep my balance. She thought I looked like a toddler learning to walk. We realized quickly that every step was painful; however, I could walk uphill (it was the easiest), flat was not fun, and it was near impossible to go downhill. This means that I sat at every downhill and scooted on my butt. My pants were soaked, I looked and felt like a wreak. Other hikers noticed and tried to assist. However, I could only trust my own body weight, pain level, and balance so I usually thanked them and said I’d be okay. Occasionally I’d take an arm.

I’m not sure I would have gotten out of that situation without Debbie keeping me laughing. She told me stories, would walk ahead of me to check the route and find the smoothest one possible, and had so much patience. I felt horrible as I realized that I ruined my roommates adventure and I didn’t want her memory of hiking with me on a glacier to be a negative one. At the end of the day, we had a wonderful adventure. Minus the pain I enjoyed the hike back. As you can tell by the last photo we took that day, that we still enjoyed ourselves.

I asked Debbie to drive my car back to Anchorage. Even though it was my left leg I didn’t feel like I could or should be driving. I asked her to stop up above so I could change into my sweat pants as I didn’t want to ride to Anchorage in wet pants. I did take off my boot for a few seconds so that I could change my pants. I did it as quickly as possible as I knew that keeping my boot on was important as it was holding my leg safety together. It was quite painful taking my boot off and putting it back on. I of course made her drive me home as I was still deciding whether or not I wanted to go to the doctor. I kept hoping it was just a sprain. I wasn’t sure if it was all in my head and I was exaggerating the pain.

Eventually Debbie said I should go to the Doctor just to be on the safe side. I was taken into the hospital room and took off my boot. It wasn’t actually all that swollen or bruised. The nurse said that it didn’t look terrible and that the doctor would take a look at it and determine if I needed X-rays. The Doctor came in and felt all around my ankle and leg and decided that I needed some x-rays. She mentioned that only one side of my ankle should hurt if it was a sprain. She was concerned it was broken. The nurse came back in and took the X-rays. She told me that she normally cannot tell if a leg is broken or not. She said the doctor usually has to outline where the break is for her. I could tell by the way she was speaking that mine was broken. So I asked. She showed me the x-rays and said “Yours is definitely broken. I have no idea how you walked off that glacier on your own.” That boot is really the only thing that held that bone somewhat inside.

It turns out that I broke my leg in multiple locations. After looking at my X-Ray and listening to the Doctor I originally thought it was just one break; however, it turns out I was wrong. It also turns out that I tore some ligaments. I sometimes wonder how much extra damage I did hiking a mile and a half back on it. Though no one can say for sure if I did. My ankle was wrapped, I received  a pair of crutches, and was told that I would need to see a specialist the next day. That Doctor would determine what the best course of action for me would be. Not exactly the news I was hoping for. I’m so happy that I had Debbie with me. She not only drove me to the Doctors, she also drove me to get medication, frozen peas, and some dinner. I called work to inform them what was going on and that I would be late coming into work the next day. I was told to take the whole day off. So I did.

The next day I seen a specialist who informed me that I would need to have surgery. The broken leg would heal and so would the ligaments…they just wouldn’t heal right without surgery. They put a splint on my leg, which made my leg feel instantly better as it could no longer flop around as I didn’t have any real control over my leg. The Doctor informed me that he could actually twist and turn my leg / ankle any direction and have little to no resistance. It was a bad break…I just didn’t realize how bad it was when it happened. We then set a date for the surgery. 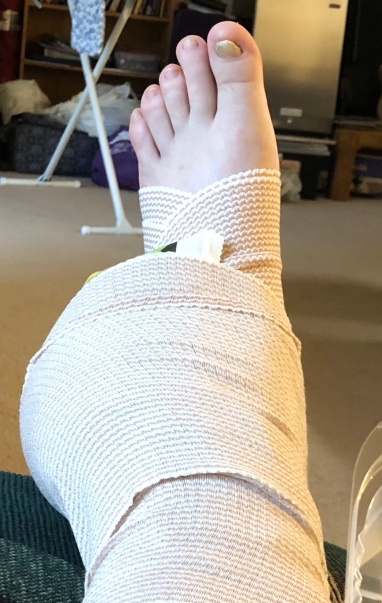 ACE Bandage. I’ve got a bag of peas wrapped around my ankle to ice it. As suggested by the Doctor. 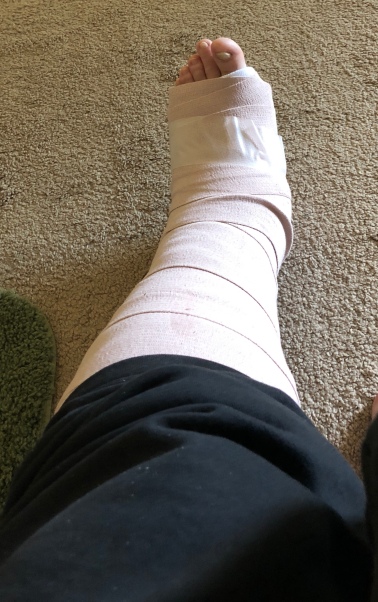 This would be the beginning of a long journey. One I’m still on.